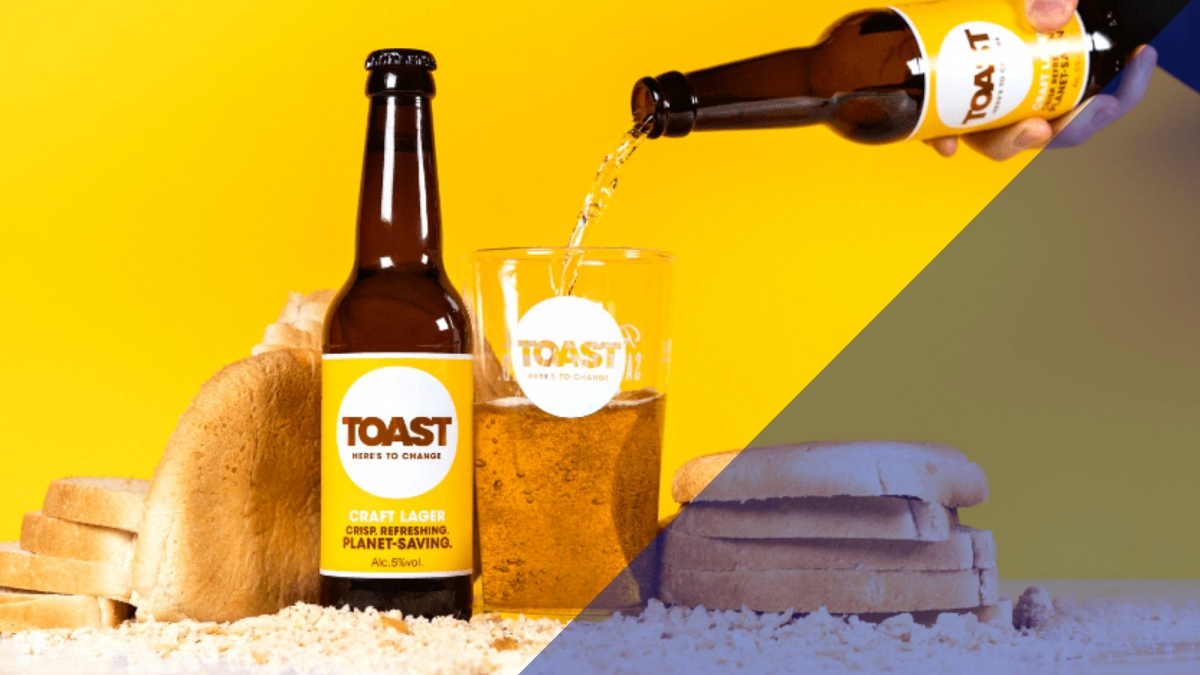 We mentioned this brand in our ‘3 Brilliant Brands Fighting Food Waste‘ blog and just had to give them a Brand of The Month. Toast Ale are simultaneously fighting food waste and producing award-winning beers, and we love it!

According to Too Good To Go, bread tops the list of the UK’s most wasted foods. Almost 900,000 tonnes of bread are thrown away annually – 24 million slices every day! Food production significantly contributes to climate change, yet food waste is still so common. That’s where Toast Ale decided to step in. They created something that would delight and unite everyone by combining their delicious brew and planet-saving mission.

By using surplus bread to replace barley, Toast Ale uses 25% less malted barley than other beers. They use less land, water and energy, avoid carbon emissions, and feed their spend grain to animals. Using this ingenious beer-brewing method, they’ve saved over 2.6 million slices of bread and 49 tons of CO2 emissions!

The Brains Behind the Bread

Toast Ale was co-founded and set up by Louisa Ziane and Tristram Stuart in 2015.

Tristram is an award-winning author and campaigner who has shared his knowledge on the written page and online. Watch his TED talk, where he was already highlighting the importance of food waste nearly a decade ago! His environmental campaigning organisation, Feedback, has also been making a sizeable impact in investigating and making changes on a local and policy level since 2013.

As well as working on climate change mitigation for 15 years, including as a consultant with Carbon Trust, Chief Operating Officer Louisa is a B Corp Ambassador. Watch Louisa explain how a beer brand can promote activism in this video.

‘Chief Toaster’ Robert Wilson has founded several social change organisations over the years and also has taken the TEDx stage, sharing his knowledge and mission of ending food waste.

From brewing small batches in East London to brewing in the US, Iceland and beyond, Toast Ale is nurturing local breweries across the world to brew local and spread the word – fighting the climate crisis can be delicious and pint sized!

Bottle, can or on tap – there’s something for everyone!

Toast Ale offers a range of products, including:

Save The World: Planet & People

This brewery’s ambition impressed us, and it seems we aren’t the only ones. Last year, the prestigious Queen’s Award for Enterprise acknowledged Toast Ale’s efforts with an award given to only a select number of UK companies.

Why? Because inside and outside of their brewery, Toast Ale is incredibly environmentally and socially driven. The beer brand streamlines its production process to be as planet-friendly as possible and gives 100% of its distributable profits to charity to” fund systemic change” and fix the food system. As of now, they have contributed a hefty £81,000 to charity and donated over 46,000 meals during the COVID crisis. Fantastic work!

“The company made a commendable response to the Covid-19 crisis, funding the food charity Feedback using proceeds from online sales to provide 46,000 meals to vulnerable communities in June 2020, made predominantly with surplus food. It is awarded the Queen’s Award for Enterprise in Sustainable Development because it is innovative, shows the circular economy at its best, raises awareness of a key sustainable development issue and provides practical and engaging solutions to food waste with all profits used in charitable work.”

As the first UK brewery to become a Certified B-Corp, Toast Ale has met and continued to work on its social and environmental impact. Since 2018, when their B Impact score was 80.7, they have reached an awe-inspiring B Impact score of 111.8.

We’re eager to see Toast Ale’s future impact as they work with partners to improve energy use in their brewing process, nudge customers to opt for low-footprint cans over bottles and ultimately be Carbon Neutral by 2030, as mentioned in their 2021 Toast Ale Impact Report.

The Companion Series: Rise Up!

A great example of their involvement and action is their Companion series collaboration.

This limited-edition series focused on the impact of the food industry on the planet’s forests, soil, oceans, rivers, biodiversity and climate. Internally, they focused on raising awareness of the direct connection between our food and the earth. Externally, alongside 25 other breweries, Toast Ale urged people to write to local Parliament leaders and helped highlight food waste’s prevalence to governmental authorities ahead of COP26.

Their combined efforts have raised over £46,000 for conservation and regenerative agriculture organisations and protected over 3 million trees in threatened tropical rainforests with Rainforest Trust UK.

We’ve been following Toast Ale for a while now and love their values and how they engage people and conversations. They’ve shown us a lot about innovation and sustainability in ways we had not expected – thank you Toast Ale!

We look forward to the continued success of their fantastic organisation and team. Cheers!

Do you know a brand who should be the Elephants Can’t Jump Brand of the Month? Start a conversation with us over on LinkedIn and Twitter to let us know which brands you think we should be watching.